One of the great things about winter is that it enables one to do things that would be impossible to do in "normal" conditions. Today, I had the opportunity to take advantage of what was, at least for me, a new winter "activity." (Generally, I'm uncomfortable with anything that can be described as an "Activity" particularly if you can hear a capital A or a ™ in it. This probably has something to do with the fact that I'm married to a teacher. I hear entirely too much about "Activities", and the mere mention of the A-word makes me want to run, screaming, in the other direction.)

Back to the point. Yesterday we went to a friend's house to celebrate her birthday. As we were getting ready to leave, her husband, Carl, told us he wanted to show us something before we left. Carl had made a skateboard with blades on it instead of wheels, upon which he attached a sail (Carl has also made, among numerous other things, his own telescope, so this was not a particularly surprising feat coming from him.) It was sort of a poor-person's iceboat. He was going to go out on the lake today if the wind was strong enough, and invited us to join him.

The wind was, indeed, strong enough, so we met Carl and his daughter on Lake Monona. We brought our ice-skates along so anyone who didn't want to try the ice-board, or whatever it's called, would be able to skate instead. It was a beautiful day: clear and not too cold, but cold enough that the ice wasn't soft.

I'm not a skateboarder and I have limited experience with sailing, so I have to admit I was a little bit skeptical about my ability to successfully ride a skateboard with a sail on it. Carl was already zooming around on the lake when we got there. It was pretty impressive to see how much ground, or, rather, ice, he was able to cover in a short period of time. Soon after, he returned, loaned me a helmet and gave me a brief description of how it worked. Next thing I knew I was gliding over the lake. It was a little bit tricky getting used to how to steer (leaning one direction or another, as on a skateboard) and managing the sail at the same time, but it didn't take long to get the basic idea. The thing could go pretty darned fast if you wanted it to, which, of course, I did. A little scary, particularly at first, but I can see that with a little more practice, this could be a ton of fun. I took a few spills, but nothing painful. I think I may have to make one for myself. The materials are pretty basic and it probably won't cost very much. Hmmm.... 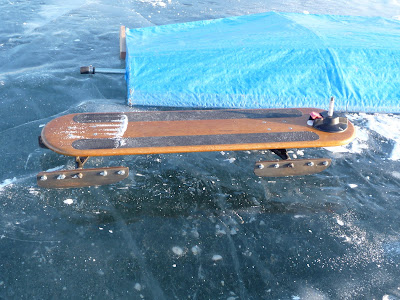 Here's the board with the sail lying behind it. 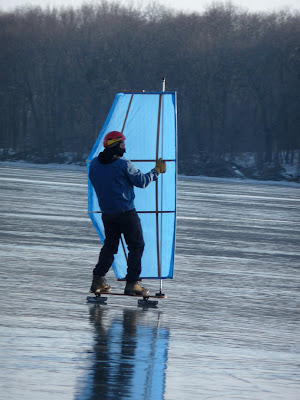 Carl, in a rare moment when he was close enough to photograph. 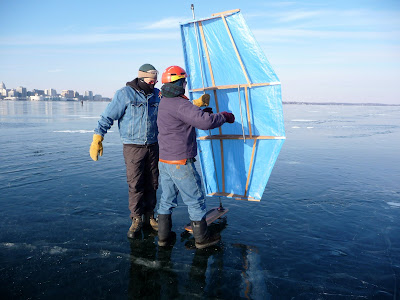 Carl explains how it all works.
Photo: Luminiferous Ether 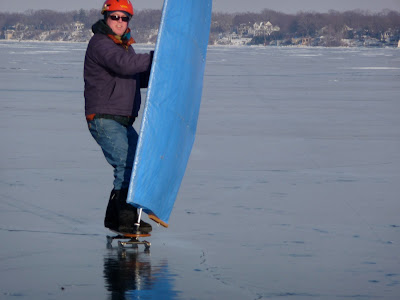 This is me on the return leg of a run across the ice.
Photo: Luminiferous Ether 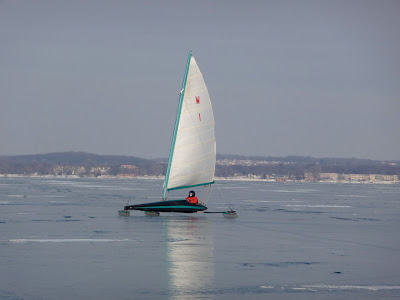 There was also a small flotilla of iceboats out on the lake. Here's one of them. 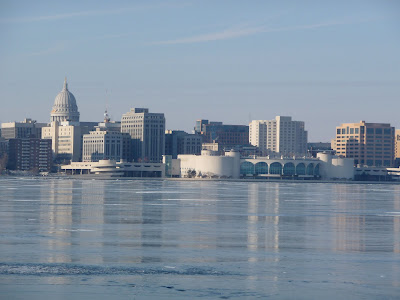 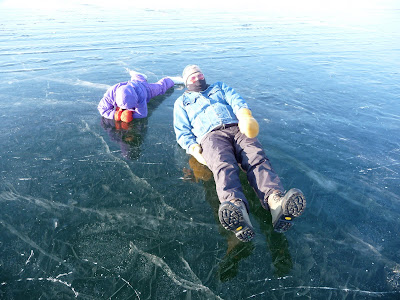 Carl and daughter Melinda out on the ice.
Photo: Luminiferous Ether 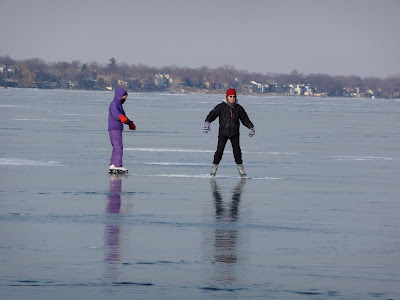 Ms. Geranium (a.k.a. Luminiferous Ether) and Melinda preferred their ice-skates.

Video of the beginning of a run across the ice, courtesy of Luminiferous Ether.
Posted by Ed at Sunday, January 31, 2010 4 comments: