Recently seen in our yard. 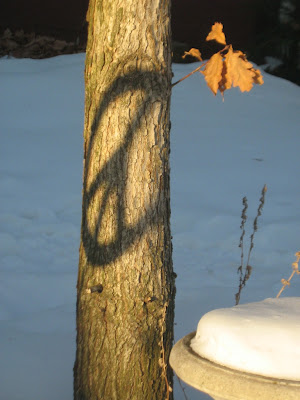 An anonymous art critic wrote "... clearly represents the elusive and fleeting nature of peace in a violent world..."

Another claimed "... signifies the artist's internal conflict over his/her latent Homosexual and Oedipal tendencies, while also drawing attention to the artist's fear of fluffy bunnies..."

A third said "... Dang! It's freaking cold out! Gods, I hate snow! When is spring going to come? I hope those stupid groundhogs were wrong! Hurry up and take the stupid picture! ..."

I just thought it was a cool picture. What do you think?

A tip o' the hat to Pagan Sphinx for her "Shadow Shot Sunday" blog posts, which have inspired me to pay more attention to shadows.
Posted by Ed at Sunday, February 15, 2009 4 comments:

Okay, all you Republicans, tell me why you oppose President Obama's stimulus plan. He's already compromised more than I think he should, given the fact that he won the election (had it gone the other way, the Republicans would have called that a mandate) and the Democrats have a majority in both the house and the senate. You say you want more tax cuts. Who will benefit from your tax cuts? Certainly not the unemployed. What is wrong with spending on programs that will not only create jobs, but will also result in services that benefit the country? I just don't understand what the problem is. Spending on infrastructure will have the dual benefit of creating jobs, which will then result in taxable income, and providing the country with much needed services. Tax cuts will not help the unemployed. The nation needs increased spending on infrastructure, which will create jobs and provide needed services, and all you Republicans are voting against it because the plan doesn't include enough tax cuts. Are you people morons, or what?
President Obama has said that we all need to work hard and sacrifice to get through this crisis. I say that the middle class and the working class have been sacrificing for decades, and the people who have benefitted from their sacrifice have been the wealthy. It's time for the wealthy to sacrifice a little. Or maybe a lot. Or maybe a whole lot. I'm so sick of the way it has been working. "Bail me out and screw the middle and working classes!" It's the American Way. I, for one, would find it very refreshing if President Obama told the Republicans to go to hell, that he is going to do what is right for the people, not what will benefit the wealthy. I'm not holding my breath, but it would be nice.
Posted by Ed at Sunday, February 01, 2009 5 comments: