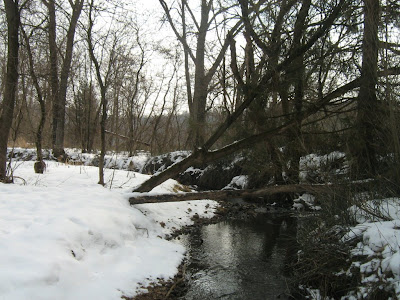 Late in February, I had the pleasure of chaperoning a field trip to Pop's Cave near Richland Center, WI, with Sparkly Seacow's 7th grade class. I've been meaning to get to putting these pictures up for some time, but, for some reason, I haven't had energy for blogging, or much else, in recent months. 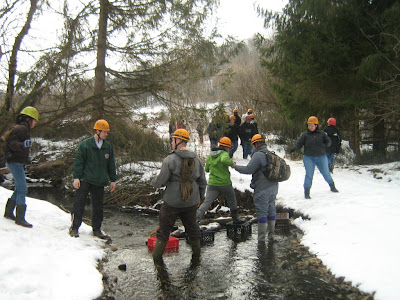 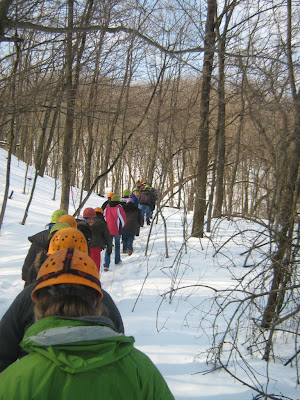 ... and through the woods.
I got the sense that some of the kids on the trip had never been out of the city before. Several of them seemed a bit scared. Our family has done a lot of camping, hiking and things of that sort, so it was odd to witness the reactions of people that don't have that opportunity. 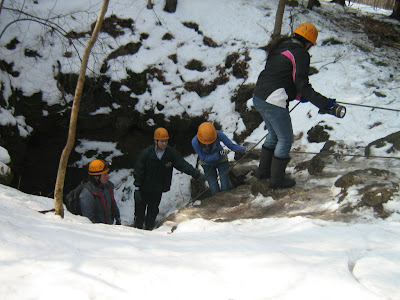 Down a hole into the cave. 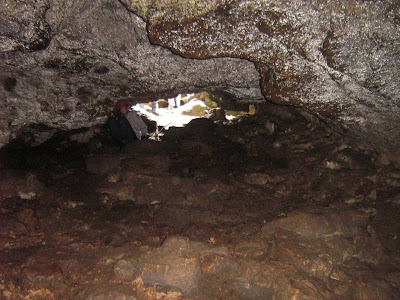 This is a view of the hole as seen from the inside. Since I had to use a flash, most of the pictures won't actually show what it looked like while we were inside. Once we got away from the entrance, it was much darker with the only light coming from our flashlights and headlamps. 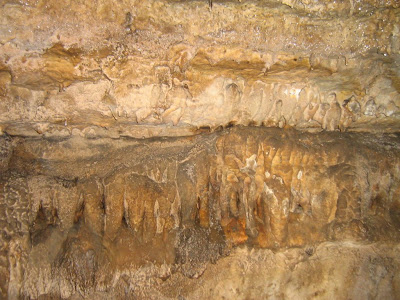 One of the walls in the first chamber. 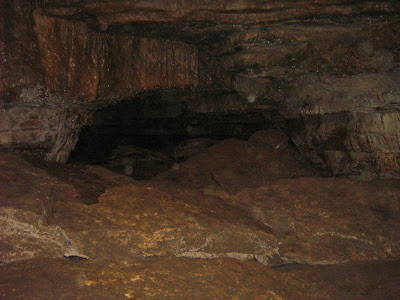 More of the first chamber. Most of the parts of the cave had names, but I don't remember all of them. 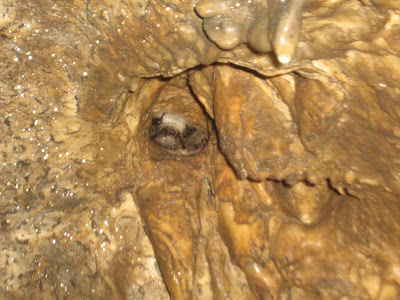 A wee bat. We tried not to disturb them, but just imagine a bus-load of middle school kids coming into your bedroom while you're trying to sleep. Poor bats. 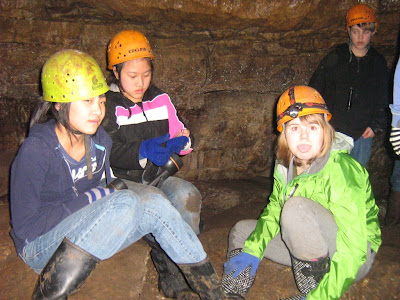 Some of the kids taking a rest. That's Sparkly Seacow in the green jacket. 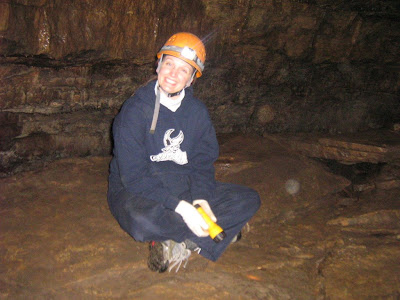 One of the teachers waiting for the mob to pass through a part of the cave called "The Birth Canal." We had a couple of adults go first, then some kids, more adults, more kids, ending with adults. 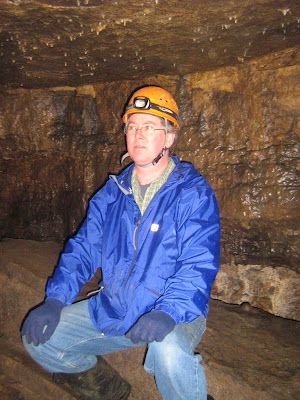 That's me waiting for the mob to pass through the birth canal. I got to be last. Those helmets sure look dorky, but I would bet that there wasn't a single person who didn't clonk their head in that cave at least a few times. 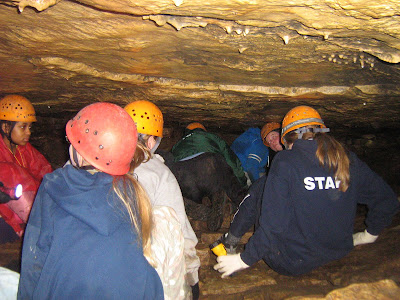 The tail end of the mob heading for "The Birth Canal." 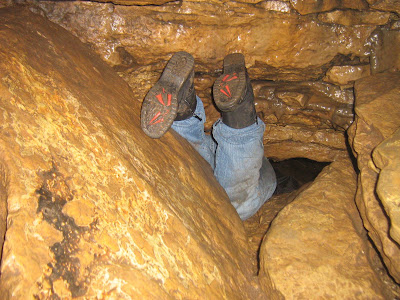 This is probably my favorite picture of the bunch. I think you know the name of this passage. 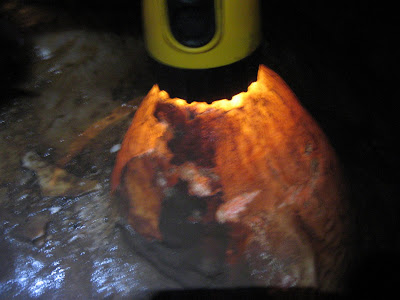 Some of the rocks were translucent and would glow if you put a light on them. 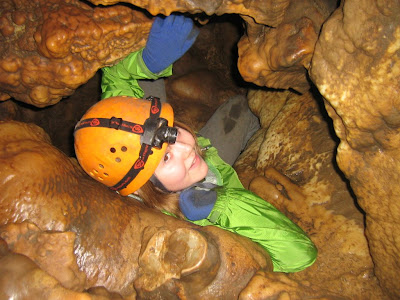 Sparkly Seacow crawling through "The Mole Hole." It leads into a small chamber big enough to seat about five people. 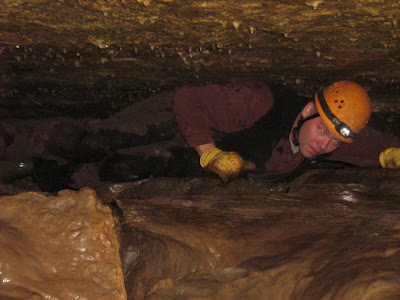 One of the other adult volunteers squeezing through a tight space.


What a great trip! It's not often one has the opportunity to see a cave like this. The cave is on private property and it's pretty amazing that the owners of the property allow schools to visit. I hope the kids appreciated it as much as I did.
Posted by Ed at Monday, April 27, 2009

I am so glad that Sparkly finally got to experience this place. I've been hearing about it for years. In fact, I wonder if I visited this cave in Wisconsin Odyssey class back in high school. I do remember a cave visit.

I have heard that southwestern Wisconsin and northeastern Iowa are actually riddled with caves like these. Very cool. But I also admit to a certain shortness of breath even looking at the photographs of those very narrow passages. I don't know if I could do it!

Definitely the coolest field trip ever! And who says those hats look dorky? I was just thinking I need one of those to go with my driving gloves and goggles.

I remember that field trip. I could only stay in the cave for so long before I started getting claustrophobic.

Amazing field trip. But I would have stayed outside and cheered everyone on. I can do BIG caves, like Carlsbad or Mammoth, but anything much smaller? Then Mr. Traphobia comes to visit. Sounds like Suzy and Cinderbelle have met him. Claus doesn't pester me often, but a spot like "The Birth Canal" brings him running!

Suzy: I had doubts about whether or not I would be able to handle the cave, but once I was there, the cave itself was enough to distract me from those fears.

Lisa: You say the kindest things!

Cinderbelle: I had forgotten that you went to Pop's Cave. Why wasn't I invited to chaperone?

Fantastic Forest: Welcome! I can't say for sure, but as I mentioned to Suzy, my fears evaporated (mostly) once I was in the cave and looking around at all the cool stuff. The "Birth Canal" was a pretty intense experience, though. Of course, once one has gone through it in one direction, there is no choice but to return from the other side. A bit unsettling. Thanks for visiting!

Sounds like a fabulous field trip!! Did you guys go in the mud room? That's always my favorite part. And did you guys go all the way back to "The End"? Into the rock that is the furthest back "THE END" is scratchedd into it.

I just took a trip here, awesome experience! I was very worried that I would become claustrophobic in the cave, way too cool to even think about that. Anyone who is doubting that they will freak out from the tight spaces, don't worry about it. It's such a cool experience, you won't even think about it. This is coming from a very anxious person too!

I went to Pop's Cave waaaaaaay back in 1978 on a high school field trip and LOVED it, even though this was the place where I discovered I had claustrophobia. And yes, I discovered that in the middle of the Birth Canal. :-)

So I was wondering if you could be so kind as to post the location of the cave entrance. A link to Google Maps would be fantastic! I have been scouring the Internet, but I keep coming up empty. Thanks!

Where exactly this at?

Where exactly this at?